As a mafia consigliere in his ongoing action-suspense series, "Vincenzo," Song Joong Ki proves he is always in character.

More than just showing emotions on screen, the 35-year-old actor seems unaware of how visually pleasing he is in every episode of "Vincenzo." Of course, we can all agree that he ages like fine wine. His character as Vincenzo Cassano in the ongoing weekend series give the viewers lots of reasons to watch him beat thugs and turn tables in favor of the law.

Song Joong Ki as Vincenzo Cassano Consistently Serves Visuals - and We're Here for All of it!

In "Vincenzo" Episode 12, Hong Cha Young (Jeon Yeon Bin) found out the difference between the snacks she and Vincenzo debated on - bungeoppang and ingeoppang. They made a bet that whoever is proven wrong will receive a forehead flick - like what they did before.

This time, the lady lawyer won. 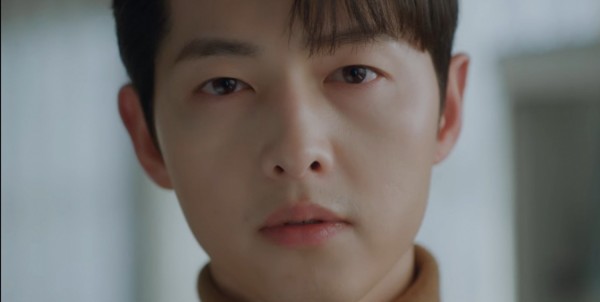 ALSO READ: Song Joong Ki to Have Intense Face-off with 2PM's Taecyeon in the Second Half of 'Vincenzo'

Hong Cha Young did some warm-up to tease Vincenzo she will be harsh on him this time. But when she was about to flick his forehead, the female lawyer was captivated by Vincenzo's beauty.

With his eyes closed, Hong Cha Young got mesmerized as she stared at him - until Vincenzo opened his eyes and they unexpectedly stared at each other.

This short, fluff scene between the two main leads instantly gained popularity in the online community, especially Vincenzo dressed in a brown turtleneck and his side-swept hair that take our breaths away.

Fans can't hide their admiration for the Korean actor, though it's worth mentioning that this is not a first as he always captures viewers' attention, whether with his suave suits or his limited edition Booralro sleepwear.

Meanwhile, "Vincenzo" Episode 12 achievef an average rating of 10.7 percent nationwide. And to give you a glimpse of what to look forward to in "Vincenzo" Episodes 13 and 14, check out the short yet intrguing teaser here:

We can't wait to see what will unfold this time around, now that a traitor has emerged, Hong Cha Young has severed her ties with her intern/friend, Jang Jun Woo, and how Jang Han Seo will cover his guilt of attempting to murder his own brother who has been abusing him for years.

Of course, the "ChaCenzo" / "CenCha" shippers remain on standby until our power couple Vincenzo and Hong Cha Young finally wear their hearts on their sleeves.

Were you also captivated by Song Joong Ki's overflowing visuals in "Vincenzo"? Share your thoughts with us in the comments!