Well, who could not have fallen in love with the relationship of Captain Ri Jeong Hyeok and chaebol heiress Yoon Se Ri in the hit series "Crash Landing On You." It's a relationship that builds not on material things but by acts of service and trust. Without a doubt, their love story blossomed beautifully. The main leads have done their job exquisitely as well as the second leads did not disappoint.

Koo Seung-jun / Alberto Gu and Seo Dan's tandem was also a scene-stealer. Kim Jung Hyun played as a South Korean conman who plans to destroy the family of Yoon Se Ri by attempting to marry her because Se Ri's father caused his father's bankruptcy.

On the other hand, Seo Dan, played by Seo Ji Hye, is a North Korean department store heiress. Their paths crossed when Gu Seung Jun went into hiding in North Korea for scamming Se-Ri's brother. Their love-hate relationship surely captured the hearts of many.

If you miss seeing them, here is a Youtube vlog uploaded by Kim's agency. First, he was greeted by CLOY's director Lee Jung Hyo. Inside the exhibit, they also showed how thorough they follow the safety protocols of Covid-19. The mask even made it hard for their co-stars to identify them quickly.

A fellow co-star was also present inside. Actress Yoon Ji Min who played the sister-in-law of Se-Ri was also there for the reunion. When the two hugged, Seo Ji Hye jokingly said "Don't the two of you hate each other" in which Yoon Ji Min quickly walked away.

Kim Jung Hyun reunited with Seo Ji Hye. The actor recently visited the exhibit: teamLab: LIFE when the actress invited him to join her. He even joked he would wear a jersey but opted to wear one of the outfits used during the filming of CLOY during their reunion.

The actor was so overwhelmed and felt grateful to Seo Ji Hye for inviting him. He continued by telling that the wardrobe he wore was from the scene where he winked, and Seo Ji Hye couldn't stop her laughter when Kim added that he brought an extra training jersey. He jokingly continued that he would have brought a cello case but decided not to as it might get more attention than the exhibit.

ALSO READ: These Are The Top 5 Best Second-Lead Couples in K-Dramas, According to Viewers

When he came across a person taking his video, he said that Koo Seung Jun never died, he is alive, and both laughed. Seo Ji Hye said that he would take good care of Kim today because she is not a guest rather the host.

The actor joked around Seo, saying that she now has a business in South Korea, and her tone has changed. Seo quickly replied Dan's family moved to South Korea since they are ruined in the North.

The closeness of the two was very much obvious as Seo teased Kim about his betrayal when he appeared as a cameo in Seo's drama "Dinner Mate." 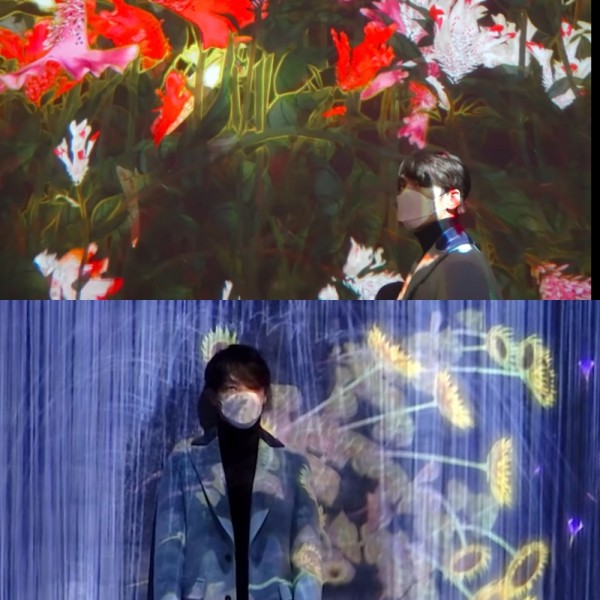 Kim had tour of the colorful exhibition. Then ended the video by thanking Seo for inviting him. Seo then said to the camera to give lots of love and support for Kim Jung Hyun.

Watch the video below to experience the exhibit and see both had fun together.