The post's caption expressed how he appreciated his friend's kind gesture. He even called Jung Il Woo "Hyung" (Korean word for an older brother) and said that the actor is his longtime friend.

Jung Il Woo sent his coffee truck to Kim Bum while filming JTBC's new drama "Law School." This is also the first coffee truck the actor received in the show. Along with the truck is a banner, which reads: "Bum is coming. Bum is coming. Top student Joon Hwi (Kim Bum's character name) of 'Law School' is coming."

Are you also curious how Jung Il Woo and Kim Bum became close friends? Continue reading to find out! In 2006, the two starred in the hit drama "Unstoppable High Kick." It's also well-known in the industry that both of them and Lee Min Ho are good friends. The latter and Il Woo attended the same middle school, while Kim Bum became friends with both of them after being in the 2006 drama. Although the three have been unable to meet for some time, industry sources claim that they still share a strong bond. 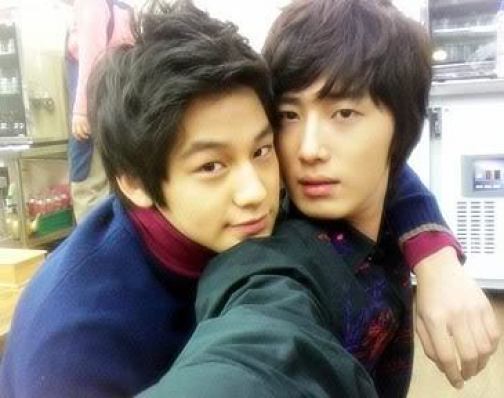 Ki Bum's next drama, titled "Law School," tells the story of the students and professors of South Korea's top law school who were entangled in an unusual case. The actor will portray the character of Han Joon Hwi, a first-year law student who is at the top of his class. He will be starring alongside Kim Myung Min, Ryu Hye Young, and Lee Jung Eun. ALSO READ: Lee Min Ho Sends Coffee Truck to Kim Bum on Set of 'Tale of The Nine-Tailed'  On a similar note, Lee Min Ho also sent Kim Bum a coffee truck on the set of the latter's ongoing drama "Tale of the Nine-Tailed," in which the actor currently acts alongside Lee Dong Wook and Jo Bo Ah.

In "Tale of the Nine-Tailed," Kim Bum portrays the character of Lee Rang, a half-blooded Gumiho and also the half-brother of Lee Yeon (Lee Dong Wook). He seeks revenge on his brother for leaving him alone in the mountain unprotected. He also harbors a deep-rooted hatred against human beings. After he unleashes his seductive prowess by granting his victim's wishes, he scams them into paying a hefty price for their earthly desires.

ALSO READ: 'Start-Up' Included Among The Best K-Dramas in October 2020 + Is Your Favorite K-Drama Included?