"Hospital Playlist 2" updates fans as they unveil the official premiere alongside the photos during the first script reading.

With 12 episodes, the tvN drama received massive popularity and support from the viewers after successfully wrapping up season one last May 2020.

Now, the highly anticipated show gears up with exciting behind the scene stills during their table read as they announced the drama's premiere. 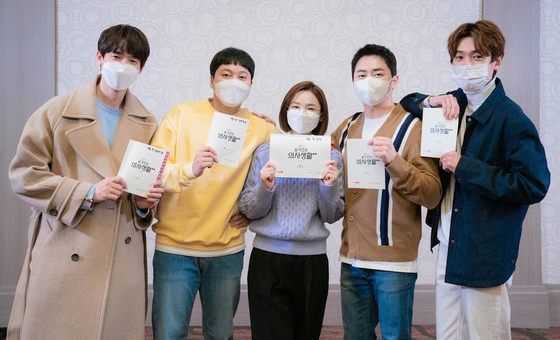 According to the broadcasting network, fans can now witness the highs and lows of five skilled doctors at the Yulje Medical Center as "Hospital Playlist 2" premieres on June 17.

Aside from this, tvN also released the sneak peek reunion between the cast and crew during their first script reading session dated January 2021.

The said actors play the roles of Lee Ik-Joon, Ahn Jeong-Won, Kim Jun-Wan, Yang Seok-Hyeong, and Chae Song-Hwa, a group of five friends who were not just doctors but also shares the same passion for music.

In a 12 minute video posted by Channel Full Moon, it appears that the whole cast displayed amazing chemistry as compared to the previous season.

In a report cited by a South Korean outlet, child actor Kim Jun, who plays the role of Lee Woo Ju was not able to stay at the table read but managed to say hello to the cast and greeted Jo Jung Suk, who happens to be his on-screen father.

Prior to the script reading, "Hospital Playlist 2" director Shin Won Ho left a short speech as he welcomed the cast and crew for the upcoming drama.

"The simple and everyday stories that we have told until now will be drawn out with even more warmth and depth."

On the other hand, the production team says that they are "looking forward" to the amazing teamwork and chemistry of PD Shin Won Ho, writer Lee Woo Jung, as well as the actors.

In addition, the team also made sure that the viewers will surely enjoy the second season, adding, "As long as you have waited, we will give back with a great drama."

READ MORE: Here Are The Possibilities That We Look Forward To In "Hospital Playlist" Season 2

Following the announcement of multiple outlets, #HospitalPlaylist2 immediately became a trending topic on Twitter as fans expressed how excited they were for the upcoming drama.

finally, after 1 year of waiting for #HospitalPlaylist2 we're gonna see them again on JUNE 17!! 😭💙 pic.twitter.com/5lLB2zIvqc

Meanwhile, the second user also expressed the same stance and named the lead stars as her favorite doctors.

At the same time, an individual lauded the on-screen and off-screen sweetness of Cho Jung-Seok to Kim Jun.