Read on to know what went down in the latest episode.

After revealing her identity to Kang Yo Han (Ji Sung), Jung Sun Ah (Kim Min Jung) became more affectionate towards Kang Yo Han, but left unreciprocated. Before they talked about the real deal, Kang Yo Han starts to retell their stories from the past.

According to what his memory, Jung Sun Ah was a new maid in Isaac's mansion. She was fascinated by beautiful and brilliant things, that was why she kept on stealing expensive items from Isaac's house. 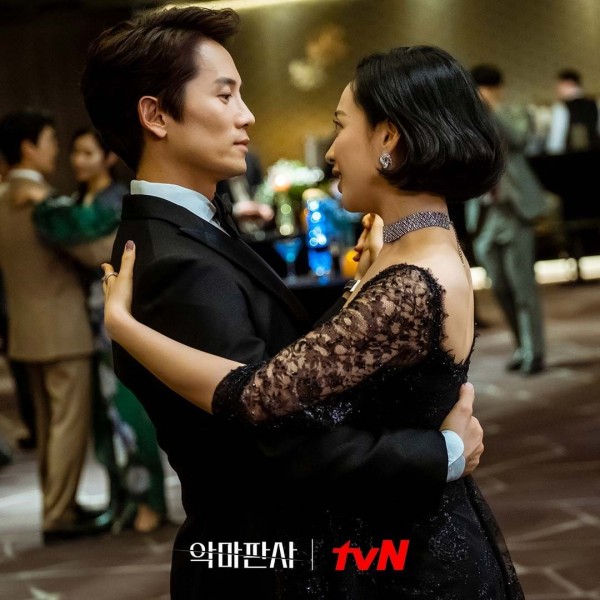 Some of those memorabilia are the ones Kang Yo Han noticed being displayed in Jung Sun Ah's room. During that time, Jung Sun Ah was very open about her feelings to Kang Yo Han to the point that she always did whatever he wanted even though it would put her in danger.

In The Devil Judge Episode 6, Jung Sun Ah tried to negotiate with Kang Yo Han to leave the Social Responsibility Foundation alone, and not get involved in anything related to it. But Kang Yo Han didn't find Jung Sun Ah's words threatening at all. In fact, it fueled him to dig deeper about what's really happening with the donations that the foundation receives from the public.

Ever since Kim Ga On (GOT7's Jinyoung) lived with Kang Yo Han, he also began to know the personalities of Kang Yo Han and Elijah (Jeon Chae Eun). They were distant to him at first, but as Kim Ga On spends time living with them, he begins to take good care of them.

Elijah went to Kim Ga On to tell that Kang Yo Han was not home yet. She found it odd since the judge is not the type of person to go home late.

Kim Ga On accompanied the young lady in the living room and waited for Kang Yo Han. His simple gesture made Elijah smile.

When Kang Yo Han arrived, he found Elijah and Kim Ga On sleeping on a sofa. He made sure not to make any noise when he was about to arrange the jacket that Kim Ga On covered for Elijah.

But Kang Yo Han suddenly tripped because of a wheelchair behind him, prompting a slapstick comedy unfolding.

The Devil Judge Episode 6 also featured the chemistry of the three. The next morning, Elijah asked Kim Ga On to cook ramen for her breakfast, but to her surprise, the young man cooked a full meal for them to enjoy early in the morning.

Meanwhile, Kang Yo Han became suspicious of Elijah for seeing her smiling everytime Kim Ga On did something kind and sweet.

The three shared a breakfast meal together. Kang Yo Han, who claimed he doesn't have a taste for food, emptied his plate.

Kim Ga On introduced Elijah to his childhood and longtime best friend Yoon Soo Hyun (Park Gyu Young). They seemed a bit awkward from each other at first, until Elijah acknowledges Yoon Soo Hyun's beauty, which made the detective blush.

Elijah: What's the relationship between you two?
Gaon: Why do you ask?
Soohyun: We're friends. Didn't he tell you?
Elijah: He didn't tell me, that his friend is this beautiful
Gaon: She's pretty?
Soohyun: Why are you laughing #가온아_악마판사_가온나 #TheDevilJudgeEP6 pic.twitter.com/Z46KHt2rtl

They were in the middle of a conversation when Kang Yo Han arrived, who looked angry and accused Kim Ga On for kidnapping Elijah. Kim Ga On and Yoon Soo Hyun were shocked by his aggressive behavior.

The Devil Judge Episode 6 signals Yoo Soo Hyun is in danger for stepping into Kang Yo Han's private life.

After their friendly meetup, Kim Ga On immediately went to Kang Yo Han. Just the moment he was about to talk, Kang Yo Han mentioned all of Yoo Soo Hyun's information.

This alarmed Kim Ga On and protested not to be involved with Yoo Soo Hyun. Kim Ga On called Yoo Soo Hyun to warn her about Kang Yo Han. But it didn't help that the lady detective is determined to look for evidence she can use against Kang Yo Han.

Please he really care about her..look at his worried face.😭 And she was making all effort to not make him worry..What us this called if it's not love😭#TheDevilJudgeEp6 #TheDevilJudge #Jinyoung pic.twitter.com/XR4m2sJDqt

The next day, Kang Yo Han found out that Yoo Soo Hyun is secretly investigating his work. Yoo Soo Hyun went to continue her investigation while speaking with Kim Ga On on the phone. A minute after, someone hit her head and she ended up in the hospital.

Kim Ga On arrived to check Yoo Soo Hyun and his eyes couldn't lie on how worried he was for putting his friend in danger.

He went back home and without hesitation - Kim Ga On punched Kang Yo Han in the face. He was about to punch back but then tried to compose himself and warned Kim Ga On not to mess with him anymore.

What can you say about the chemistry between GOT7's Jinyoung, Ji Sung, and Jeon Chae Eun in The Devil Judge Episode 6? Share your thoughts with us in the comments!