The year 2017 produced so many top-rating and smash hit dramas that are filled with romance, fun, and even moral lessons that the viewers can always look back to in life: "Strong Woman Do Bong Soon," "Fight For My Way," "School 2017," "Chicago Typewriter," to name a few. But let's admit once and for all. "Because This Is My First Life" remains remarkable. With its great plot and thoroughly-written script, the drama didn't struggle to touch the viewers' hearts. 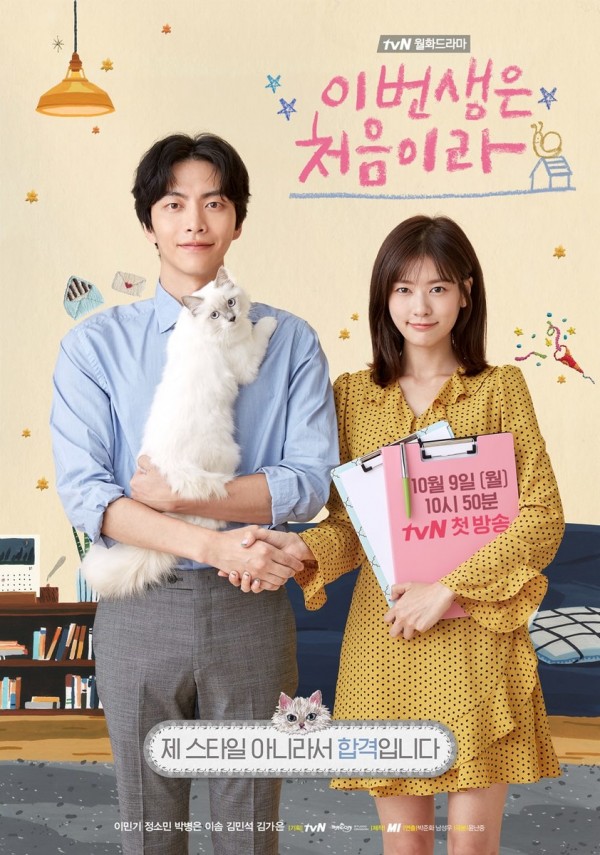 With the cast member's excellent acting performance, viewers resonated with the drama series on a whole new level.

But where are the fun and quirky "Because This Is My First Life" actors and what are they doing now? Let's find out!

The timid and awkward yet quirky computer designer and homeowner Nam Se Hee, who proposes to arrange his own marriage to his bubbly and charming tenant in order to pay off his apartment mortgage, captivated the viewers with his unique charms.

"Because This Is My First Life" marks Lee Min Ki's return to the small screen as the lead actor since 2007.

In 2019, he starred in the thriller drama "The Lies Within" with "SF8" actress Lee Yoo Young.

He recently appeared in the 2021 MBC romantic comedy drama series "Oh My Ladylord" (also known as "Oh! Master") with After School's Nana and CNBLUE's Minhyuk.

Lee Min Ki will also appear in the upcoming JTBC drama series "My Liberation Journal" that will premiere in 2022.

Who would ever forget the cute and optimistic Oh Ha Ni in the 2010 hit drama "Playful Kiss" with handsome actor Kim Hyun Joong?

Jung So Min played the role of scriptwriter Yoon Ji Ho who is also a tenant that agreed to marry his landlord for her convenience.

In 2018, Jung So Min reunited with Lee Min Ki through a brief special cameo in the tvN's romantic comedy drama series "What's Wrong With Secretary Kim."

The actress partnered with seasoned actor Seo In Guk in the 2018 mystery thriller drama "The Smile Has Left Your Eyes".

She also made several cameos in different South Korean dramas "Abyss," "Be Melodramatic," and "My Roommate Is A Gumiho."

In 2020, Jung So Min starred in the medical drama "Soul Mechanic" with actors Shin Ha Kyun, Tae In Ho, and Park Ye Jin.

The actress will come back to the silver screen with the upcoming South Korean film "Wolf Hunting." Details as well as release date are yet to be announced.

Esom, the best actress nominee and "Scarlet Innocence" star, played the role of Woo Soo Ji, the ultimate girl crush and pretty girl with a great personality which every "Because This Is My First Life" viewer loved and admired.

With the show's success, Esom landed a slew of multiple projects. In 2018, she coupled up with "Cheese In The Trap" actor Seo Kang Joon in the romantic comedy series "The Third Charm." She also appeared in the film "Microhabitat."

The playful yet lovingly caring CEO Ma Sang Goo was played by veteran actor Park Byung Eun. He diversified his acting role through the rom-com drama and showed his acting prowess brilliantly.

He also reunited with his "Because This Is My First Life" co-stars Lee Min Ki and Jung So Min in the 2018 romance comedy drama series "What's Wrong with Secretary Kim".

He came back to the big screen with the sci-fi drama film "Seo Bok" with Gong Yoo and Park Bo Gum.

Park Byung Eun will be joining Jeon Do Yeon and Ryu Jun Yeol in the JTBC's 10th Anniversary Special Drama "Lost" that will premiere in September.

YOU MIGHT ALSO LIKE: 'She Was Pretty' Cast Update 2021: Where are Park Seo Joon, Hwang Jung Eum, and More Six Years after the Drama Ended?

The actor also appeared in the smash hit thriller drama "Kingdom: Ashin of the North."

In "Because This Is My First Life," she played everyone's favorite character, the energetic and beautiful woman who dreams to get married one day, Yang Ho Rang.

After the drama ended, she landed the main lead for the 2018 romantic comedy drama "I Picked Up a Celebrity on the Street" with "Oh My Venus" heartthrob Sung Hoon.

Kim Ga Eun recently appeared in the 2021 workplace drama "On the Verge of Insanity" with Jung Jae Young, Moon So Ri, and Lee Sang Yeop.

Nation's favorite supporting actor, Kim Min Seok, appeared in the top-rating and smash hit dramas "Flower Band," "Hi! School-Love On," and "Who Are You: School 2015."

He received attention and appreciation after portraying the roles of a doctor and military officer in the 2016 dramas "Descendants of the Sun" with Song Joong Ki and Song Hye Kyo and "Doctors" with Kim Rae Won and Park Shin Hye.

In "Because This Is My First Life," the actor played the young CEO and long-time boyfriend of Yang Ho Rang (Kim Ga Eun). Fans and viewers loved and deeply resonated with his character.

He made several cameos in dramas "The Beauty Inside," "Heart Surgeons," and "Racket Boys."

Kim Min Seok also made his appearance in the silver screen with films "Monstrum" and "Jesters: The Game Changers."

In 2021, he is set to come back to the small screen with KakaoTV's upcoming drama series "Engine On From Today." Production and details are yet to be released.