TVING shared a glimpse of Kim Go Eun and Ahn Bo Hyun on the set of the newest Kdrama, "Yumi's Cells."

The 10-minute video featured the making of episodes 3 and 4, highlighting Goo Woong and Kim Yumi's date while showing off intense on-screen chemistry.

Interestingly, this is also the first time that the actors watched the animated version of the Kdrama.

The next scene was at the restaurant where Goo Woong invited Yumi for dinner.

In the behind-the-scenes clip, the "Goblin" star shared how she loved the food props, including kimchi, omelet, and more.

To recall, it was the scene where Goo Woong captured the hearts of Yumi's cell after showing that he genuinely cares for her despite his lame jokes and lousy first date look.

The behind-the-scenes video also displayed the working relationship with the 'Itaewon Class' actor and the 30-year-old beauty.

It was the scene where Goo Woong dropped Yumi off at her house.

In the behind-the-scenes, the production staff told Ahn Bo Hyun that the frog noises were real.

Upon learning this, he teased Yumi thinking that it would scare her.

Unfortunately, she refused to believe it and told him, "Of course they're fake! Are you a fool?"

Of course, the fun did not stop there as the 33-year-old actor trolled his co-star while rehearsing for their kissing scene.

It was supposed to be a heart-fluttering moment for their character, but Ahn Bo Hyun pulled off a joke as he pretended to snap her while holding her face, causing the crew to laugh.

Meanwhile, Kim Go Eun can't help but laugh as the actor tries to pull her for a kiss, prompting the production team to retake the scene a couple of times. 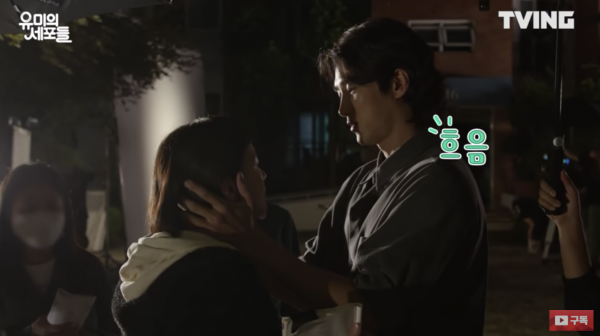 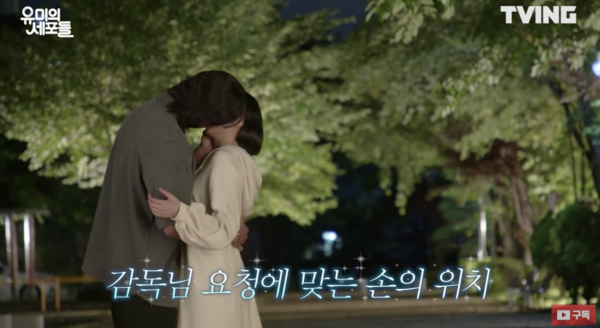 In the rom-com Kdrama, she plays Goo Woong's longtime friend and co-worker, who has a secret crush on him.

In the 10 minute clip, she spoke about her character and described Se Ji as someone who is set to bring out Yumi's jealousy.

Moreover, she also mentioned the webtoon's popularity and admitted that she feels worried about her character due to her connection with the budding romance of Goo Woong and Yumi.

"I have a lot of friends who are fans [of the webtoon], and they always speak so poorly of Se Yi, so I'm a bit worried," she mentioned.

However, she expressed her gratitude for being one of the cast and mentioned how fun her co-actors are as well as the script.

"I'd be thankful if you all looked forward to it as well."