Han Hyo Joo and Park Hyung Sik diversify their acting roles as they venture into a more challenging drama, "Happiness", an apocalyptic thriller series produced by the broadcast giant tvN.

The drama depicts the new normal world where a different kind of fear penetrates the people's ordinary daily lives.

"W: Two Worlds" actress Han Hyo Joo returns to the drama scene as Yoon Sae Bom, a policewoman who has a great sense of judgment, determination, and guts. 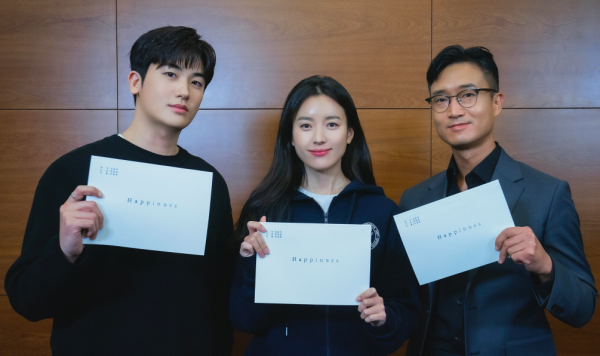 Opposite "Strong Woman Do Bong Soon" actor Park Hyung Sik who is returning to the small screen after his military discharge. He will take on the role of Jung Yi Hyun, a clever and honest detective in the violent crime department who works hard for the common good, and to protect himself and Yoon Sae Bom.

The newly released teaser poster stimulates the public's anticipation. It also attracts the attention of many with its eerie and thrilling aesthetics

Firstly, the landscape shot of the apartment that is enveloped by the darkness meets the eye. Although there's nothing much special, the silhouette that is seen in the poster reveals colorful lights shining through the apartment window, amplifying curiosity.

Next, the mysterious appearance of Yoon Sae Bom (Han Hyo Joo) and Jung Yi Hyun (Park Hyung Sik) who are looking outside through the window signifies a heart-stopping incident that took place.

Yoon Sae Bom, who had just succeeded in making her lifelong dream house come true, and Jung Yi Hyun, who lived with courage all his life, fell into an unexpected crisis. What kind of danger changed everyone's daily lives and whether the two can survive in the extreme apocalypse raise anticipation.

The production team of "Happiness" described the drama, saying, "It is a modern drama that is completely inseparable from our daily life in today's time. It is set in an apartment where people from different walks of life live. Please look forward to seeing the new apocalypse of infectious disease change the world that is our shelter."

tvN's newest drama "Happiness" is helmed together by director Ahn Gil Ho, who showed a detailed directing with "Record of Youth" and "Memories of the Alhambra", and written by "Watcher" and "The Good Wife" screenwriter Han Sang Woon for Studio Dragon.

It follows the story of the enigmatic lives of the people who lived in an apartment amidst the chaos of a surge of an infectious disease, and struggle for survival.

'Happiness' Release Date and Where to Watch

"Happiness" consists of a total of 12 episodes, with 70 minutes running time each.

The forthcoming thriller drama is slated to air for the first time on November 1 on tvN.

It will also be available on legal streaming platform Viu.