It also highlighted the natural chemistry that exudes from Taecyeon and Kim Hye Yoon, the actors who lead the new drama.

tvN's "Secret Royal Inspector and Joy" behind-the-scenes video begins with Taecyeon, who plays the role of royal inspector Ra Yi Eon, preparing to make dumplings. He playfully pretends to ask his servant Goo Pal (Park Gang Sub) for ingredients to which the latter responds, "They're right there." 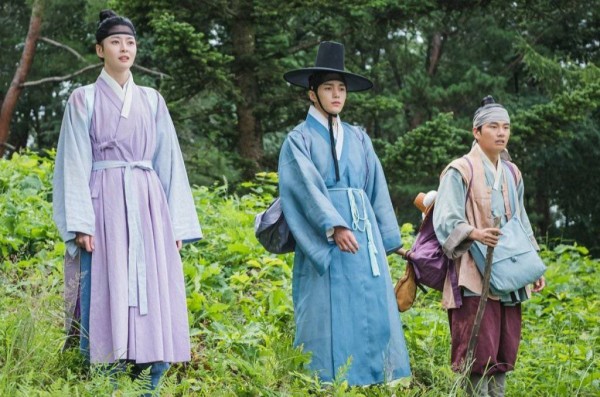 Taecyeon then jokingly scolds him and tries again, but the other man looks in a different direction, completely ignoring Taecyeon.

Taecyeon displays his playful and creative personality as he suggests another idea to the director, despite agreeing to film seriously. Luckily, the director allows his idea, jokingly saying, "What's the standard? My choice."

On the other hand, Kim Hye Yoon, who plays the role of the divorced woman Kim Joy, rehearses her lines repeatedly with Nam Mi Jung, who praises her for her vibrant beauty.

IN CASE YOU MISSED IT: Here Are 3 Reasons Why Kim Min Jae and Park Gyu Young's 'Dali and Cocky Prince' Will Be Remembered as a High Quality Artistic Romance Drama

The cast shows off their tight and fun friendship as they all joke around each other. In the next scene, Kim Hye Yoon must run into the water as she discovers the death of Bo Ri (Chae Won Bin).

After the emotional scene filming, Chae Won Bin applauded Kim Hye Yoon with a funny remark, "Even though I was already dead, I almost cried [because of Kim Hye Yoon's amazing acting]."

Finally, the production crew starts filming Kim Hye Yoon's much-anticipated divorce from her husband, No Chu Han, played by Joo Jin Soo. The two immerse themselves into their respective roles so well that they even forget to break character after their scenes.

As Kim Hye Yoon takes her final document from Taecyeon, the director jokes, "Did you take it with just one hand?" She sulkingly answers, "How dare I."

The first two episodes recorded a nationwide rating of 4.9% and 4%, and it is expected to increase as the drama progresses.

YOU MIGHT BE INTERESTED IN: Chu Young Woo, Kim Yo Han, Cho Yi Hyun and More Display Youthful Acting in the New 'School 2021' Teaser + 3 Key Points to Anticipate in the Drama

"Secret Royal Inspect and Joy" episode 3 is slated to air on Monday, November 15 on tvN.

It is also available for online streaming on iQIYI and Viu.