Park Seo Joon and Park Min Young paired up in the 2018 hit drama "What's Wrong With Secretary Kim," and their chemistry was considered among the best in South Korean television. Due to this, rumors kept on escalating that they were dating in real life, despite the two parties denying such speculations. Park Seo Joon also made comments regarding this during his past interviews.

In one of his interviews in 2018 with Hankook Ilbo, the actor spoke about how all the speculations were just stuff of wild imaginations. He emphasized that the "evidence" to prove their "relationship" had been forced.

After the show's conclusion, Park Min Young has been silent about the dating rumors, but earlier this year, she commented about this seemingly never-ending gossip. 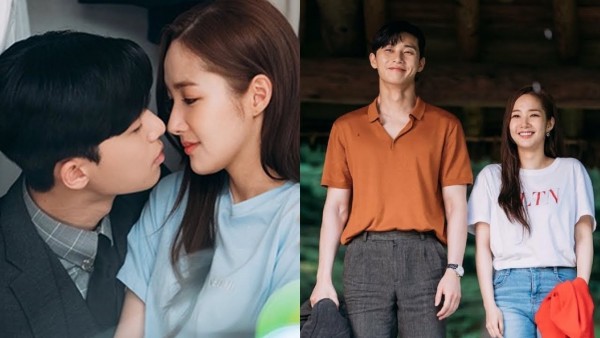 Park Min Young denied the rumors, and she felt sad that it had gotten serious, and the way people gather evidence of her being together with Park Seo Joon is not true. She denied wearing shoes, hats, and anything that linked her to the actor.

The actress finally said, "I am not dating, and I'm not getting married." But this has not satisfied the netizens who wish that Park Min Young and Park Seo Joon could be in a relationship.

Their interview that was recorded in May of 2020 has been revisited by online users. They discuss any possibility of Season 2 for their successful drama, "What's Wrong With Secretary Kim."

In the interview, Park Seo Joon thought it would be difficult to get a second season. Instead, he did suggest switching their roles and had a different twist of the story. On the other hand, Park Min Young shared it would be good if Season 2 will tackle their spinoff in terms of their married life. The actor was amused and agreed with her.

Meanwhile, many netizens commented on their Instagram accounts as they have the same breed of dog. Often, they are seen playing with their respective pets, evident on their individual SNS, and these heighten people's speculation and hopes that they are a couple due to this trivial similarity.

Two years after their drama's conclusion, and with Park Seo Joon starring in his small-screen comeback "Itaewon Class," they still cannot escape the rumors generated by their die-hard shippers. He has teamed up with Kim Da Mi, but netizens tend to compare if their chemistry was better than with Park Min Young.

Park Min Young also had her share with other actors in her drama series, but many mentioned it's not as steaming hot with Park Seo Joon.