With less than two weeks from the much-awaited debut, Netflix unveils the second poster of "Kingdom: Ashin of the North" starring Jun Ji Hyun.

The streaming giant continues to entice fans with captivating teasers ahead of the spin-off's release date.

It came after Netflix released the second poster on its official Instagram, showcasing the mind-boggling character of Ashin, played by the Hallyu queen, and her true intentions amid the great chaos that engulfed the Kingdom of Joseon.

The "Kingdom: Ashin of the North" poster hints at the woman's hunger for vengeance, fueled by betrayal and tragedy.

"Revenge of blood that will devour Joseon," the caption reads alongside Ashin standing at the top of the roof, holding a bow and arrow in soaring flames. 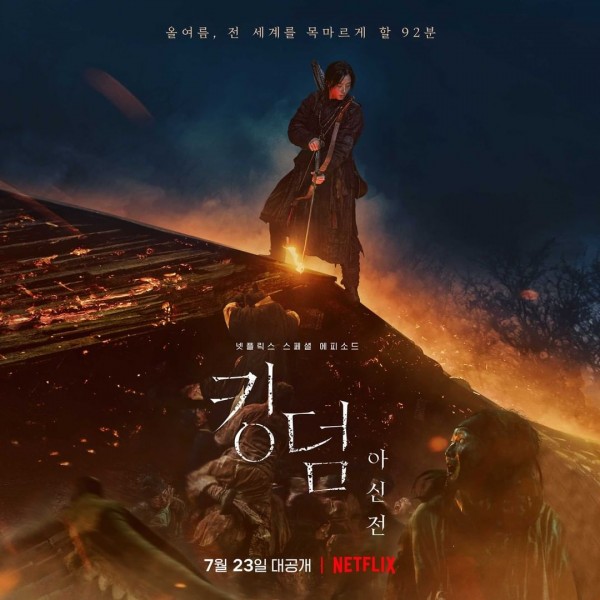 Based on the previous teaser, the highly anticipated special episode of "Kingdom" focuses on the mysterious character of Ashin and the origin of the purple flower known as the resurrection plant.

In addition, the series of still cuts also suggests how her tribe--including her family, was rundown by the flesh-eating creatures that left the whole Kingdom fall into great turmoil.

To recall, Ashin's character was welcomed in the "Kingdom 2" season finale, as she breaks away from her traumatic experience.

At the time, some viewers believed that Jun Ji Hyun's role might be the answer behind the puzzling circumstance that swallowed the entire kingdom.

However, the spin-off hints at the possibility of bringing her away from the north and deeper into the epicenter of the zombie apocalypse.

"Kingdom: Ashin of the North" Release Date, Cast, and Everything You Need to Know

The upcoming special episode is helmed by director Kim Sung Hoon and penned by screenwriter Kim Eun Hee, who both worked in seasons 1 and 2 of the hit K-zombie "Kingdom."

After confirming the star-studded cast in 2020, the "Kingdom: Ashin of the North" release date is scheduled on July 23 and will run for 92 minutes, exclusively on Netflix.

On the other hand, aside from the South Korean icon, the cast members consist of Kim Shi Ah as the young Ashin, veteran actor Kim Roe Ha, who will play the role of Ashin's father, Ta Hab, and Koo Kyo Hwa as Ai Da Gan.

During their talk at Netflix's content roadshow "See What's Next Korea 2021," the renowned writer mentioned the overwhelming response that the two seasons received and what pushed her to create another heart-pounding spin-off.

"I was worried a lot, but the viewers showed a favorable response, which gave me a lot of motivation to make good content."

Moreover, she also explained what prompted the team to release a special episode instead of "Kingdom" season 3.

At the time, she pointed out that it would be more interesting to unravel the "story of the saengsacho (the resurrection plant), adding "If the first season served as the cornerstone of the world, 'Kingdom: Ashin of the North' will be a stepping stone to go beyond 'Kingdom 3.'"

IN CASE YOU MISSED: 'Kingdom: Ashin of the North' New Stills Illustrate the Beginning of a Great Chaos