The actress takes on the role of Yeo Hwa Jeong, and since then, the viewers have been clamoring to know the heartbreaking story behind her and her husband Jang Young Guk's (In Gyo Jin) divorce.

In the latest episode, the real reason was revealed, making the viewers weep their hearts out.

In the drama, Lee Bong Ryeon, who takes the role of Yeo Hwa Jeong, is stuck in an ambiguous love triangle with her ex-husband Jang Young Guk (In Gyo Jin) and his first love.

The two married each other and were blessed with a beautiful son who is academically gifted and has respect for everyone around him.

However, after years of marriage, Hwa Jeong and Young Guk decided to get a divorce, not disclosing the real reason behind it.

In Hometown Cha-Cha-Cha Episode 12, which aired on October 3, the reason for Hwa Jeong and Young Guk's divorce has finally been divulged.

All his life, Young Guk thought that his divorce with Hwa Jeong was baseless, resenting her for years. He even blamed his ex-wife for his failed relationship with his first love Cho Hui, who is also friends with Hwa Jeong.

To Young Guk, Hwa Jeong is a selfish and rude woman who hates him so much.

However, behind her cold and strong appearance lies the affectionate Hwa Jeong who cares a lot for her ex-husband. 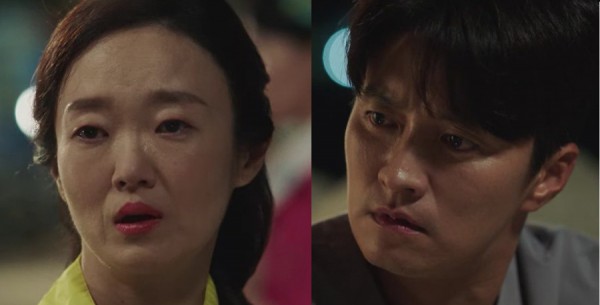 While spying on his colleague, Young Guk learned that the supplements and hot soup that were given to him were all provided by Hwa Jeong, raising his curiosity about the real reason for their divorce.

The kindness and never-ending concern Hwa Jeong had for him bothered his mind. He then resorts to a glass of cold beer, drinking with his good friend Chun Jae (Jo Han Cheol).

Three years ago, Hwa Jeong heard a conversation between Young Guk and Chun Jae talking about their marriage very badly. According to Young Guk, he only married her out of convenience, which really hurt her heart and pride.

The next morning, Hwa Jeong's heart is filled with resentment. She tosses all the dirty laundry on Young Guk who was eating, and notified him of divorce with tears in her years. It was the first time Hwa Jeong showed her weaknesses and tears, as she poured her hurt heart out. Her on point facial expressions and detailed emotional acting also made the loyal Hometown Cha-Cha-Cha viewers weep.

Lee Bong Ryeon successfully conveyed the feelings of her character who was hurt because of her husband and their divorce.

On the other hand, the sullen figure of Young Guk who just learned the real reason for their divorce raises questions about how their relationship will continue and play out in the future.