It's no surprise how Lee Dong Wook managed to land several high-end endorsements, including a string of luxury beauty brands.

The "Goblin" star wowed his legion of fans with his charming aura as he graced Elle Korea's July issue.

This is in collaboration with luxury skincare brand, La Mer who recently welcomed the South Korean heartthrob as their latest brand ambassador.

Over the magazine's official Instagram, Lee Dong Wook looked amazing as ever, showing off his fresh and flawless face.

Interestingly, the brand campaign flaunted his fair and clear skin, which is probably one of the "Tale of the Nine-Tailed" star's trademark.

In a report cited by a South Korean outlet, La Mer revealed why they chose the 39-year-old actor as their newest male ambassador.

"Lee Dong Wook's luxurious image and irreplaceable atmosphere fit well with the brand, so we chose him as the model," a brand representative explained as obtained by the outlet.

His newest campaign ad was also shared over Lee Dong Wook's Instagram, which gained over 1.3 million likes and counting. 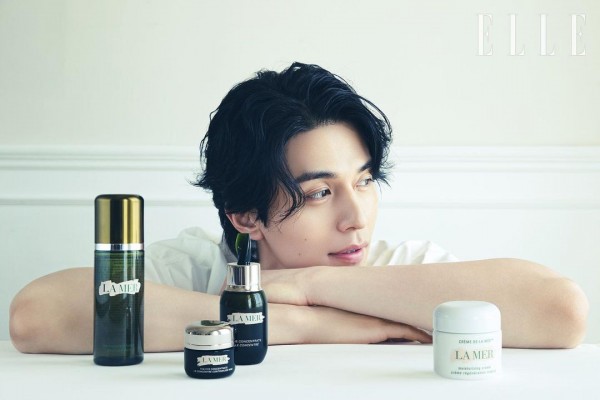 IN CASE YOU MISSED IT: Lee Dong Wook Says His Upcoming Reality Show 'Sea of Hope' Doesn't Have a Script to Follow

Seemingly, the actor also shared his skincare essential which includes the OG products of La Mer.

In a short clip, the A-lister began his 4-step skincare using the brand's Treatment Lotion that hydrates and nourishes the skin.

This was followed by La Mer Eye Concentrate, which helps puffy eyes at bay.

As for his third step, Lee Dong Wook uses The Concentrate serum that protects the skin barrier and helps fight signs of aging.

Capping off his minimalist skincare routine is Creme de La Mer, which several Hollywood celebrities have been raving about.

Apart from the 39-year-old actor, his "Goblin" co-star Gong Yoo was also a part of the La Mer family and was introduced as their male muse in 2020.

Lee Dong Wook is not a stranger when it comes to beauty and skincare endorsement.

In 2019, the "Touch Your Heart" star became the face of Chanel's first makeup for men collection.

Dubbed as the Boy de Chanel collection, the A-lister became the first-ever South Korean actor who achieved this level in collaboration with the French luxury brand.

Aside from his newest endorsement deal, Lee Dong Wook is set to appear in a series of movies and dramas this coming year.

After the success of his blockbuster movie "Beauty Inside," the OG Oppa will be making a grand comeback on the big screen with two upcoming films.

First is the melodrama film "Single in Seoul," where he plays the role of a popular lecturer and an influencer, Park Young Ho.

As for his upcoming K-drama, Lee Dong Wook is set to lead the cast of OCN's new series "Bad and Crazy" which is scheduled to premiere on November 19,