In "Running Man," episode 577, the cast once again had a wonderful time together. For this week's guest, comedian and tv personality Kim Joon Ho spent time with the members as he invited them to his big mansion to have the Mansion of Misfortune Race and gain good positive energy from the whole team.

They started the race with a bag of chocolates, and the person who will be hailed as the winner will be determined by the number of chocolates they gained from each race.

But before the mission ever began, during the introduction Kim Jong Kook was embroiled again in his love lines with Song Ji Hyo and Yoon Eun Hye. 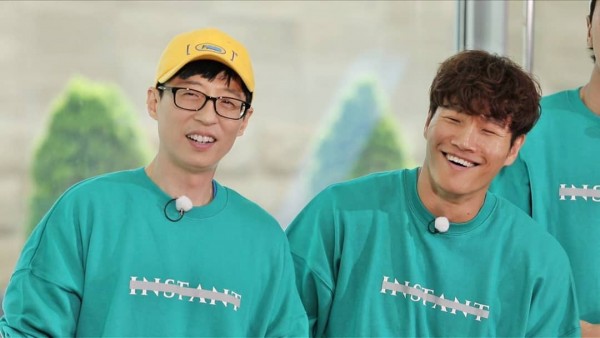 In the opening segment, Yoo Jae Suk noticed again that Song Ji Hyo and Kim Jong Kook were standing next to each other. Meanwhile, Jong Kook said that he already expected that Yoo Jae Suk would mention it, and the two started to nag at each other again.

The "Nation's MC" mentioned that the fans loved the on-screen love team of Song Ji Hyo and Kim Jong Kook. He also shared that one of his favorite Korean dramas is "Princess Hours," famously known as "Goong" in Korean.

YOU MIGHT ALSO LIKE: 'Princess Hours' Update: Suzy, Hwang In Yeop, Han So Hee, Song Kang, and More Voted to Appear in the Remake

According to Yoo Jae Suk, he wants Kim Jong Kook to play as the male lead in the drama while Yoon Eun Hye and Song Ji Hyo will play as the female leads. If given the chance that he could produce such a drama, he will do it.

The cast members couldn't say anything but laugh at Yoo Jae Suk's adlib jokes about Ji Hyo and Jong Kook.

For their team's first mission, two people had to guess each other's words while hearing loud music on their headphones. Unexpectedly, Kim Jong Kook had to explain the word "matsun" to Song Ji Hyo, which means arranged blind date for a potential partner.

Since there were time restrictions, he should explain it as fast as he could. To make it short and clear, Kim Jong Kook said "a man," "a woman," and "will you marry me," but being the life of the party that he is, Yoo Jae Suk was caught on cam making a funny face when he heard the phrased "Will you marry me?" from Jong Kook.

Meanwhile, when Song Ji Hyo guessed the right word, Haha observed the two and mumbled that he wanted to edit the scene to make it more interesting to watch. In the latter part of the episode, the "Running Man" team had a debate about who among the celebrities would be having a big break in 2022.

Song Ji Hyo surprised her members when she shared her plans for next year that "The Witch's Diner" actress will work hard and try to find love in 2022.

Due to this, Yoo Jae Suk promised to cast Yoon Eun Hye on the show and will surely ask Kim Jong Kook about it. Meanwhile, Song Ji Hyo interrupted and said she didn't agree with Yoo Jae Suk's idea of inviting Yoon Eun Hye to the show. And as a response, Jae Suk said that it would be more interesting if Ji Hyo was against it.

On the other hand, Yang Se Chan, Kim Joon Ho, and Yoo Jae Suk received the penalty at the end of the race.

Have you watched "Running Man" episode 577? What are your thoughts about Yoo Jae Suk's casting for "Princess Hours"? Share it with us in the comments!