The 14th episode of "Hometown Cha-cha-cha" highlighted how great love is, how it makes the world go around, and how it deeply affects people's lives.

In the latest episode, some of the most asked questions were answered, making viewers' breath hitch.

'Hometown Cha-cha-cha' Episode 14: Is It Really the End for Hye Jin and Doo Sik's Romance?

In the previous episode, Hye Jin (Shin Min Ah) stormed out of Doo Sik's (Kim Seon Ho) house after he refused to bare his soul to her.

The dentist felt numb and disappointed and cried her heart out in front of her landlady Hwa Jeong (Lee Bong Ryun), who was kind enough to let her inside her home to rest.

Hwajeong is so reliable, atleast she was able to help Hyejin be more understanding as to why Dusik is having difficulty opening up his pain to others 😭#HometownChaChaCha #HometownChaChaChaEp14 pic.twitter.com/bHlvTH5zbs

Hye Jin indeed needed someone to talk to, with much experience with love and relationships. Hwa Jeong gave the dentist some clarity and opened her eyes to situational differences that greatly affect how they act in a relationship.

Because of this, Hye Jin slowly understands where Doo Sik is coming from. Although she's hurt, she still thought things through with rationality intact.

However, she believes that a relationship wouldn't work when the two people involved are not completely honest with each other.

With this, Hye Jin phones her boyfriend and asks for some space for them to think and weigh things.

In the previous episodes, Cho Hui (Hong Ji Hee) comes back to Gongin to teach the young minds and hearts of the children.

But her peaceful life becomes shaky as her old friend, Young Guk (In Gyo Jin), takes an interest in rekindling his dormant feelings for the young teacher.

However, in the latest episode, Cho Hui relishes the moments of her teenage life and the sole reason why she turned Young Guk down.

Cho Hui spent her teenage life in the seaside village of Gongjin, with the company of Hwa Jeong and Young Guk. She adored the two of them, and they soon became best friends.

“mom, im not crazy. its a person liking a person how can it be a sickness?”

But things were different for Cho Hui, as she adores Hwa Jeong more than she could ever know. Choi Hui's heart beats for Hwa Jeong, a living proof that love indeed sees no gender. Despite her undying feelings for the woman, she still wants Hwa Jeong to be happy. While cleaning the streets, together with the other residents, Cho Hui urges Young Guk to reignite the fire that was between them. To her surprise, Young Guk thought about the things he did and didn't do over the course of their marriage. And when he plans to win Hwa Jeong back, Cho Hui gives her blessing and cheers on him.

As soon as Young Guk receives Nam Sook's (Cha Chung Hwa) message saying that Hwa Jeong and a man were drinking alone together, he runs for his life to her restaurant, only to be welcomed by a drunk Hwa Jeong who was alone. Shocked, Hwa Jeong shoos him away, thinking she was dreaming. But Young Guk stays and gathers all the courage he could muster.

Unlike his cheery and overbearing personality, Young Guk now begs for Hwa Jeong's forgiveness and a chance to be with her again. He also promises her that she will be a good husband to her, and he will do anything he can to help her and make her happy, together with their son. Crying but also elated, Hwa Jeong punches his chest with tears dripping down her face, finally letting herself become vulnerable.

Doo Sik Slowly Destroys the Wall Around Him, Letting Hye Jin In

After thorough thinking, Doo Sik thinks it is only fair to Hye Jin, his girlfriend, to know more about him. But things are easier said than done. In the previous episodes, Doo Sik had a hard time letting people in his life, after the people around him, whom he dearly loved, left him one by one. 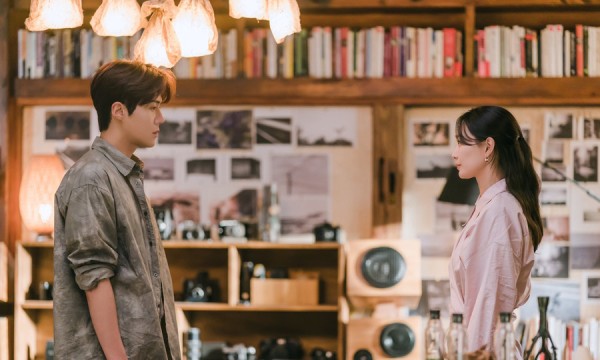 He engraved in his mind that he is never worthy of someone's love because he brings bad luck to anyone he loves, the reason why he keeps Hye Jin at bay. However, Hye Jin decides that she will not pry until the man thinks it is the right time for him to remove his mask and be vulnerable with her.

i dont know why seonah blamed dusik for her husband's death, but imagine how it feels like for dusik being told that he brings death when he was a child then later being blamed for the death of someone he loved.. my heart hurts 😭#HometownChaChaChaEp14 pic.twitter.com/KQVzhAg1Ka

The two certainly have different feelings about their current situation, but Doo Sik is trying with all his might.

On the other hand, Hye Jin sees herself at a crossroads after receiving a clinical job offer in Seoul and staying in Gongjin with the love of her life.